A Wet Concours Was Still a Winner

The Appalachian Adventure ’22 Concours was a wet, soggy event but it still delivered winners in nine classes plus the “Best of Show” winner of Allen Peerson with his 1959 Porsche 356A Cabriolet.

This was a repeat win for Allen in the rain. The last time it rained at the Appalachian Adventure Concours in 2019, Allen also swept that rain-soaked concours,

Concours lead David Butler and Appalachian Adventure Chair Bill Price arranged for an 11:00 a.m. start with staging beginning at 10:15 a.m. so participants had time to sleep in after Friday’s driving tours and great German-themed dinner.

The challenge wasn’t an early morning start but it was driving rain.  The rain reduced the numbers who wanted to show their cars and the numbers who came to visit.  The bigger problem was that the rain washed away the chalk marks on the Concours Field for staging the field and overnight someone had illegally parked their Jeep in the middle of field in a cattywampus position that totally messed up the staging and beauty of a symmetrical concours field. 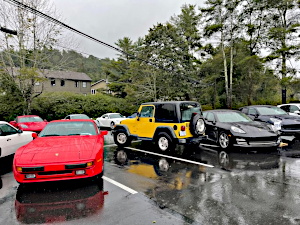 Finding the owner or towing the vehicle proved elusive so the show went on with a yellow Jeep in the sea of Porsches.  Thanks to David and the team of Charlie Hickey, Bill Price and Don Therien for working around the obstacle and the rain to deliver a great concours field. 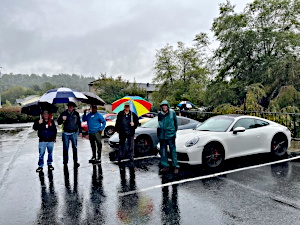 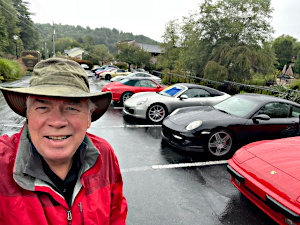 Meanwhile Jim Moore and his staging team of Nort Northam, Kevin Duffy, Yohan Sookdeo, Don Grainger and Dick Maybach were standing in the rain encouraging participants to be patient while an alternate plan was created “on-the-fly” by David and his team at the show field.

It all worked out and the show went on at 11:00 a.m. as planned. Everyone was good sports walking the show with umbrellas and their ballots voting for their favorites in each category. 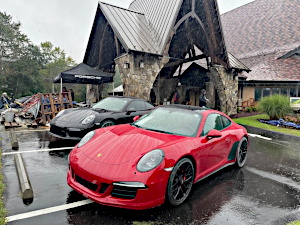 Porsche Asheville was on the field with their tent and two beautiful pre-owned Porsches that Sales Manager Luis Alvarado is hoping caught a participant’s fancy.  One Porsche is a 2015 911 GTS in Carmine Red with a PDK transmission.  This is a low mileage vehicle that was extremely well taken car over its life.

The other Porsche on offer was a 2019 911 Turbo S Coupe with PDK transmission in Jet Black over black.  This is a newer version of the similar cars both Yohan and I drive.  Once you drive it and experience the power, you’ll want nothing else.

You can view more details on these cars on the Porsche Asheville web site:  https://www.porscheasheville.com/used-inventory/index.htm  If you are interested in either car you can contact Luis Alvarado at   alvarado@flowauto.com or via phone at (828) 232-4000.

This year’s lunches were box lunches of deli sandwiches. I am not sure if people were happy to eat because the sandwiches were so good or it was just great to get out of the cold, wet rain.

There were ten winners on the show field but I think we all won when we returned to our rooms for a hot shower before heading to Chip Perry’s car barn.

Here are the winners in each category: 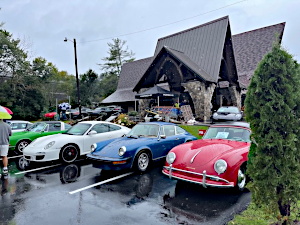 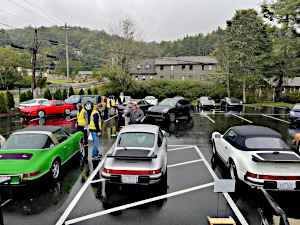 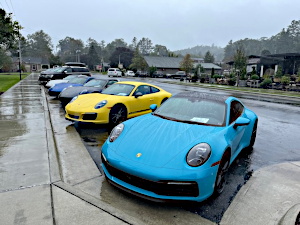 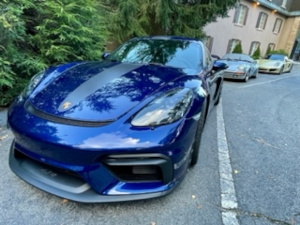 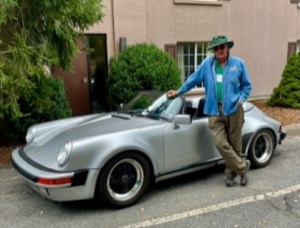 The other big winner for the day was Don Zink who won the Tech and Historical Quiz, a challenging test of Porsche knowledge.  Don Zelm finished second.
Thank you to Dan Dazzo for creating the quiz. 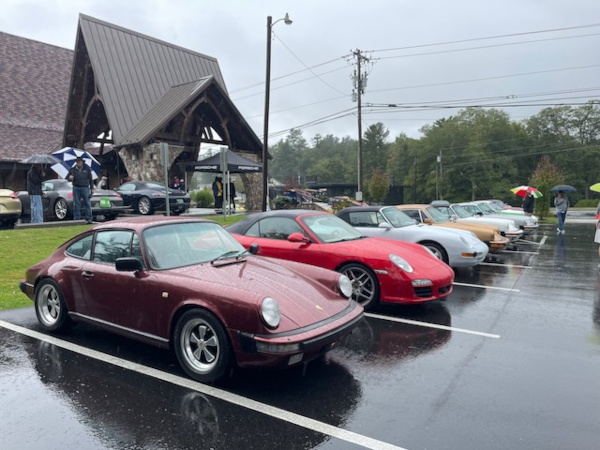 Photos by JIm Moore unless as noted.