Don Granger attended another great Petit Le Mans race this past weekend at Road Atlanta; here is his report.

The Porscheplatz makes an ideal location for watching the race and spending time with other Porsche owners. In addition to driver meet & greets, technical presentations, raffles, large screen tv’s, etc. it is one of the best locations to see the racing action. The Porscheplatz was sold-out for this race, as is frequently the case. It is best to reserve early. Only Porsches are allowed to park in the corral. Placed along turns 10A and 10B you have a view as cars come down the hill after the long back straightaway through 10A and 10B all the way to the bridge at the top of the next hill where the cars dive down to the pit straight.

The largest incident during this years’ race took place here just prior to turn 10A as the cars were accelerating when the green flag came out after a long full-course caution. This incident took out five or six cars, including one of the GTLM Corvettes. 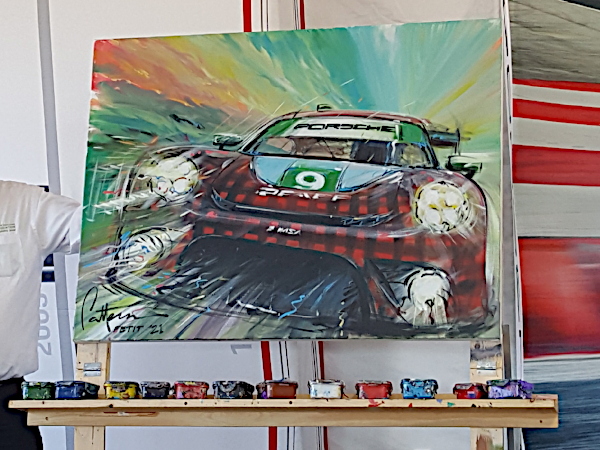 The painting included with this article is of the Pfaff Motorsports Porsche with its distinctive plaid livery. It was painted live during the race in the Porscheplatz tent, and was auctioned off to benefit the Austin Hatcher Foundation. It drew a bid of $3500 during the auction. This artist is a regular at IMSA races, and I have seen him at other Porscheplatz locations including the Rolex at Daytona and the 12 Hours of Sebring creating his live paintings for charity.