Celebrating the Five Year Anniversary of the Appalachian Region

Appalachian Region of the Porsche Club of America finally celebrated the five-year Anniversary of its founding a year late after a COVID delay, but what a celebration it was.

The party hosted 100 members at a sophisticated, elegant soirée at the Country Club of Asheville.  The night consisted of socializing, great eating, speeches, awards and prizes. 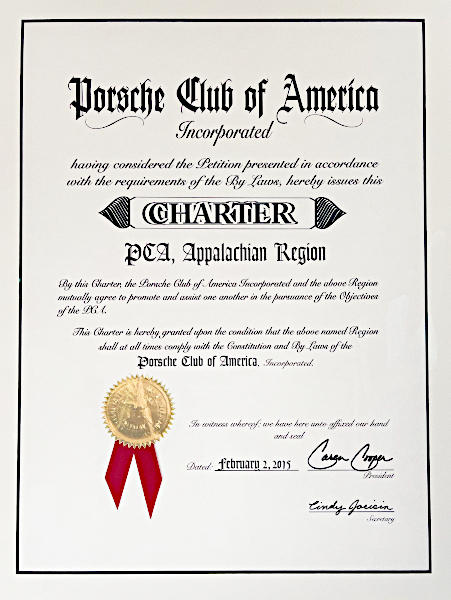 A five-year anniversary is represented by wood since it is strong and long lasting.  This describes the core of the Appalachian Region that started strong on February 2, 2015 with 94 members and is now represented by 535 members.  As current Past President Peter Graham recounted we started with less than a dozen events in the first year and now conduct over 40 events in a calendar year. For a summary of our orgin see The Beginnings by Jim Peterson.

The party started with a social at 5:30 p.m. but in typical Appalachian Region fashion, celebrants were already waiting in the lobby of the Country Club at 5:10 p.m. eager to start the party.  Once the doors opened, members streamed in to be welcomed by Bob and Lorraine Poe at the check-in desk where they got their raffle ticket and a friendly welcome to the festivities. (Thanks Bob and Lorraine for manning the check-in.) 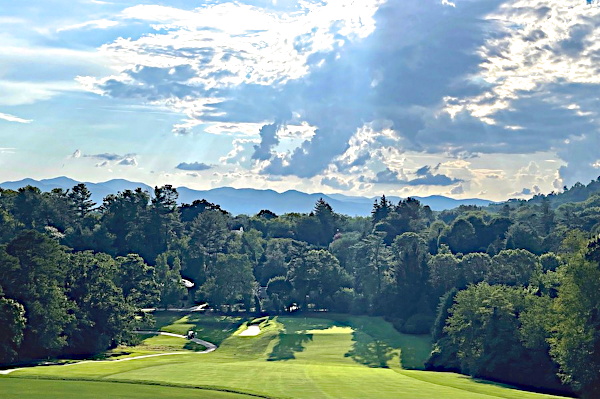 Upon entering the party room for a pre-dinner cocktail, guests were immediately wowed by a view down the fairway with looming mountains in the background.  Many guests immediately went to the balcony even before ordering a drink to take in the stunning environment of the night’s party.

Conversation quickly ramped up as attendees saw their Porsche friends.  It was good to see at least a quarter of the guests being new members who came to socialize with their new friends who are the members who have made the region what it is today.  Many of those original 94 members were in attendance and quickly rekindled their old friendships.

The social hour could have gone on the entire evening, as everyone seemed to be having a great time, but it was time for dinner and a welcome by President Don Therien.

As the tables filled up, Don welcomed everyone with an overview of the evening’s events. Don gave a welcome the Region’s guests, Zone 3 Rep Rod Johnson and his wife Rebecca and former Zone 3 Rep, Vic Rola and his guest Jackie Israel.  Vic worked with the Charter Formation Members to shepherd the Region formation process through the National Executive Committee.

Special guests from Porsche Asheville, who is the Region’s primary sponsor since Day One, included General Manager David Smith and his wife Jeni, Sales Leader Luis Alvarado and Master Porsche Technician Patrick Laughton.  Porsche Asheville was kind enough to supply an assortment of Porsche branded goodies that were awarded as raffle prizes throughout the night.  Thank you Porsche Asheville, and remember, let’s support them when you are buying a new Porsche, VW or Audi or having your Porsche serviced.  Porsche Asheville has been the Appalachian Region Platinum Sponsor since our formation in 2015.

The dinner kicked off with a plated salad before tables were led to the staff-served buffet of flank steak, salmon, asparagus, carrots and roasted potatoes.  It was a terrific meal.  Three decorated cakes highlighted dessert with an offering of Carrot Cake, Lemon Cake and Chocolate Cake.  We quickly learned that Carrot Cake is the club favorite as the slices went quick and those who missed out grumbled why we didn’t have more Carrot Cake.  Since this was the only misstep of night, it was not too bad for the planning committee of Don Therien, David Butler and Jim Moore.

After dinner and dessert, the program started with Jim Peterson, the first President of the newly formed Appalachian Region providing a history and retrospective of how we came to be the 142nd Region of the PCA.  Of particular note was the teamwork required by the Founding Charter Members who worked to gain approval of the new Region while continuing to run the Mountain Area of the Carolinas Region with events for members.

You can read Jim’s detailed recounting of the history of the Region in his June 11, 2021 article titled “The Beginnings” published on the Appalachian Region web site:  https://aprpca.org/356B/index.php/news/667-the-beginnings-210611

The current Board, led by President Don Therien recognized the thirteen Founding Charter Members who formed and started the Region.  Don presented special certificates of recognition to these thirteen individuals whom included: 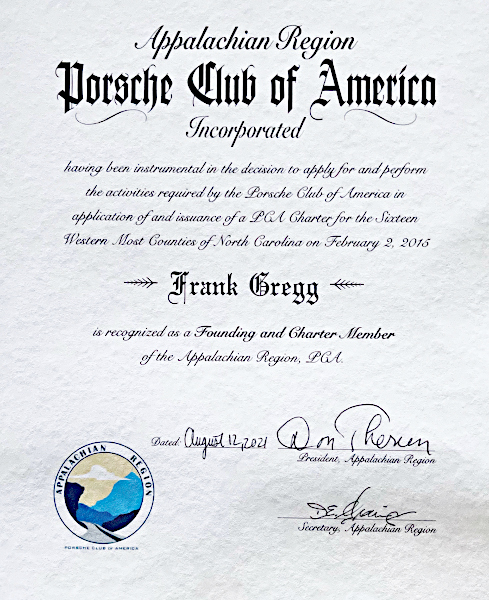 The certificates read as follows:

Having been instrumental in the decision to apply for, and perform the activities required by the Porsche Club of America, in application of and issuance of a PCA Charter for the 16 Westernmost Counties of NC on February 2, 2015

Peter Graham, the current Past President reviewed many of the major achievements of the Region including hosting the National PCA event, Treffen Asheville in only the third year of the Region’s existence.  Over the five years of existence the club has ramped up its events with the Luft Wasser Porsche Celebration in Brevard, the three-day multi-event Appalachian Adventure, annual New Member Social Picinc, a dozen driving tours in a year, technical events, Breakfast Rambles and Brewery Socials.

Recognition from PCA National included First Runner-Up Region of the Year Award Winner for 2017 (awarded in 2018), the Public Service Award for 2020 and First Place for Class III Region Web Site awarded in 2021.

The Region contributes to the Community of Western North Carolina with regular monthly efforts at MANNA Foodbank, as well as annual participation at the VA Car Show and contribution to the VA Hospital.  The Region also hosts an annual Holiday Party in conjunction with Porsche Asheville that has provided support to organizations such as Boys and Girls Club of Buncombe County, Read to Succeed, Helpmate and Guardian ad Litem of Buncombe County.

The evening was capped with awards presented by President Don Therien to individuals who really made significant contributions to the formation and growth of the Region over the past six years.  These contributions have made the Appalachian Region one of the most successful Regions of the Porsche Club of America.  Awards were presented to: 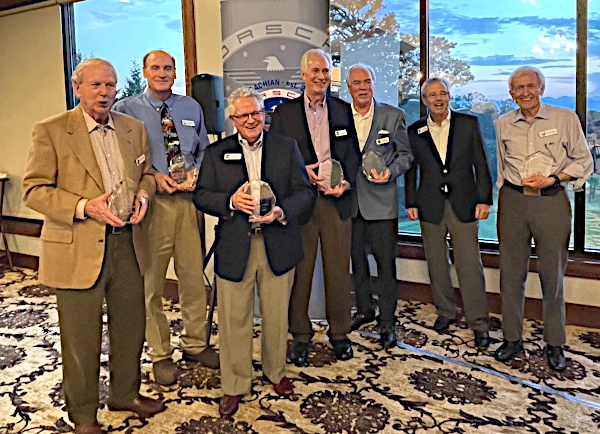 These are just a few of the individuals that created the success of the Appalachian Region, but the real success is all the members who create events, volunteer to help run the events and come to the events.

The night ended with a final socialization by members as they filed out to their Porsches for the drive home to prepare the next five years of the Appalachian Region’s legacy.

Congratulations to all and thanks for coming to the celebration.  See you at the next Appalachian Region event.

For a recap of the history of the Region as seen in photos, you can enjoy this video as produced by Scott Walker:  https://aprpca.org/356B/index.php/news/2020-news-archive/537-video-history-of-apr-s-first-five-years-200317?highlight=WyJ2aWRlbyJd

Enjoy the photo gallery below of the night’s events from Dick Maybach.