Sixteen Appalachian Region members in 11 Porsches met up in Waynesville to start a two-day overnight trip to the Tapoco Lodge for a drive of the Tail of the Dragon in Deals Gap, Tennessee.

The drive started ominously with one 911 suffering a flat tire from a screw in the tire and one Boxster leaving the line five minutes into the drive. Both Porsches were able to rejoin and have a successful couple of days but as the drive leader these events raised concern over what the next two days might bring as we attacked some serious driving roads.

The first hour of the drive continued the challenges, as the line was accordioning down highway 74. At one point I got a call on the radio that the rear of the line was significantly over the speed limit while as lead I was only doing 60 mph. As I slowed some, the next call was that the line was doing 47 mph in the middle.

“Oh boy, what a two days of driving we were going to have if we couldn’t stay together at a good pace on the highway.”

An hour into the drive we stopped for lunch at the Nantahala Outdoor Center and our challenges continued, as parking was non-existent. Circling a jammed parking lot with 10 Porsches in tow is not a fun experience.

But, finally a break, a Center employee pointed us to a nice paved section of road nearby that he said we could use for parking.

This was the turning point! 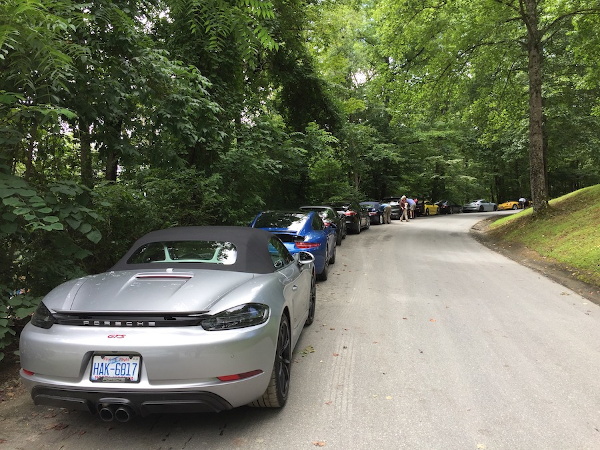 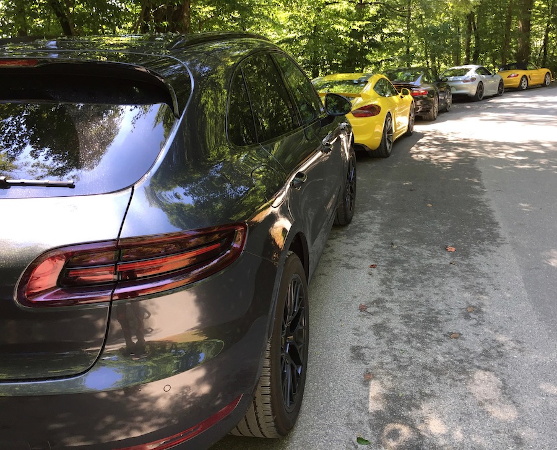 We all had a great lunch at the Outdoor Center while watching kayaks and rafts navigate the rapids. The meeting of new friends and sharing with old friends started and we were off on a fun two days. Once we pulled out the lot and started driving the twisty two-lane Nantahala Gorge we were all of a sudden in-synch. The line was tight and coordinated. As the lead, I was finally able to breath a sigh of relief.

As we turned onto NC-129 we were able to start enjoying the curves that Porsches love. Two hands on the wheel and a foot on the gas were providing all the enjoyment and fun that was promised when this trip was planned out.

The high point of the day’s drive was going to be running up the “Chasing the Dragon” Hillclimb route where you are rewarded with an exciting drive that culminates in a beautiful 300 degree overlook view of mountains everywhere at the Maple Springs Overlook.

The drive to the Hillclimb road didn’t disappoint as I picked up speed to see how everyone would do with the twisties. Success, unlike the highway drive everyone stayed together and had no problem driving the speed limit on NC-129 up to the Hillclimb route. In mountain driving sometimes the posted speed limits can be a challenge so I was glad to see my rearview mirror showed everyone together and cornering the mountain roads safely. 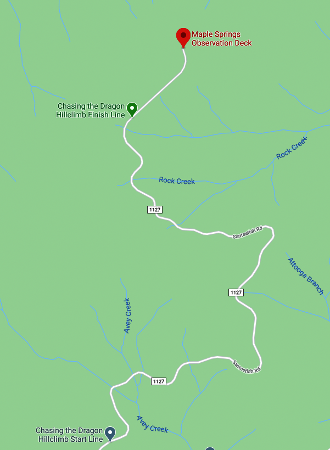 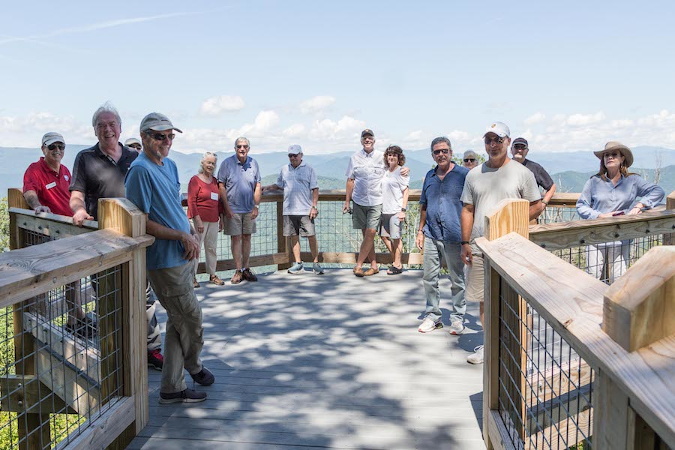 Once we reached Santeetlah Road, the Hillclimb Road, the line slowed in preparation for the dance up the “Chasing the Dragon” Hillclimb route. My black turbo 911 and Don Lowcage’s gray Boxster shot off as the “rabbits up the road” to set the pace for an exhilarating drive up the route. The road deadends at the top so one Porsche after another pulled in with the driver smiling and the passenger with white knuckles. Everyone loved it though and we took the short walk out to enjoy the view from the observation deck. The conversation was lively at this point as everyone recounted his or her favorite driving experience up to this point.

The day ended with a 30-minute drive to Tapoco Lodge where we met up with the other 10 members for a Happy Hour with a Bourbon Tasting followed by dinner at the Tapoco Tavern on the River. As Dan Dazzo observed over dinner: “There are a lot of smiles on the faces so it was a good first day.”

A 7:00 a.m. run of the Tail of the Dragon had been set up to avoid the traffic the route always has so it was an early night by all.

The Porsches started gathering at 6:45 a.m. in the parking lot where the drivers formed two lines based on being an experienced Tail of the Dragon driver or a novice Tail of the Dragon driver. Don Therien led the experience group while Dan Dazzo, our Chief Driving Instructor led the novice group to show the line through the 318 curves they would be experiencing in the next 11 miles. Dan provided a safety briefing with driving tips specific to the route that prepared the drivers for the early morning run. 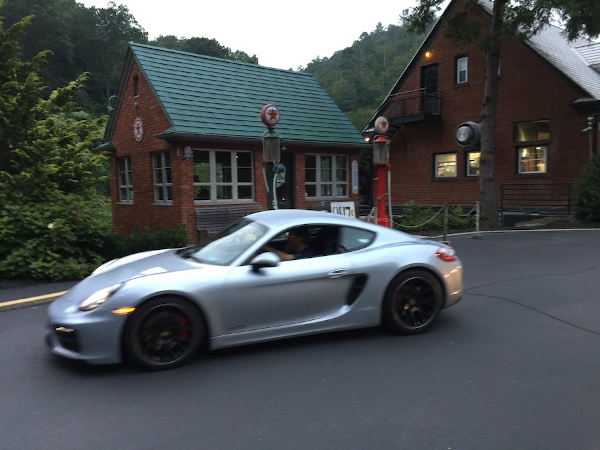 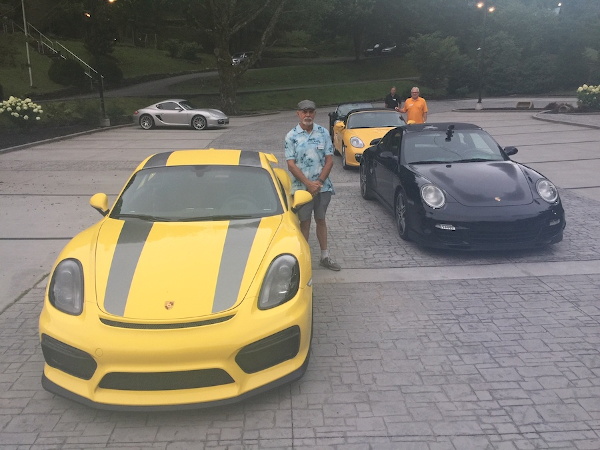 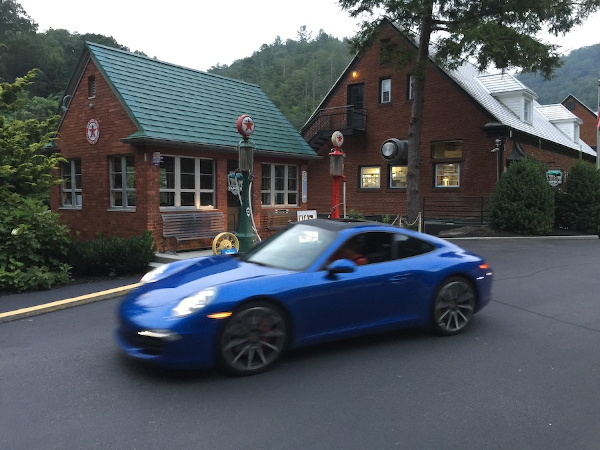 The drive for both groups delivered on the promise of fun. Each group only experienced one slow vehicle that soon pulled over so Porsche fun could continue.

The group breakfast at the Tapoco brought everyone back together who just drove and those who were going to drive in the next group. The 9:30 a.m. saw another nine Porsches go out on the Dragon. On the return some peeled off the tour to enjoy the overlooks, or stop at the store for the window decal proudly proclaiming: “I slayed the dragon.”

In the meantime, David and Dianne Angelus were convening another group of Appalachian Region members at Fontana Dam to drive the northern part of the Moonshiner 28 that leads into Tail of the Dragon. A fun drive up the Moonshiner showed the capabilities of all involved as we approached the Tail of the Dragon. We had a pretty run, but since it was noon we had several slowdowns behind the Harley-Davidsons before they pulled over to let the better handling Porsches zoom by them. 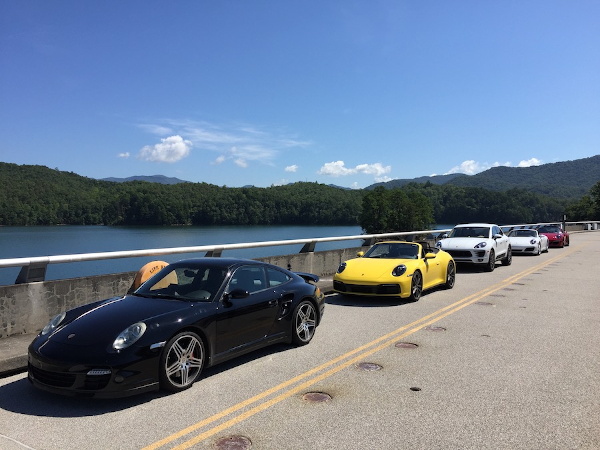 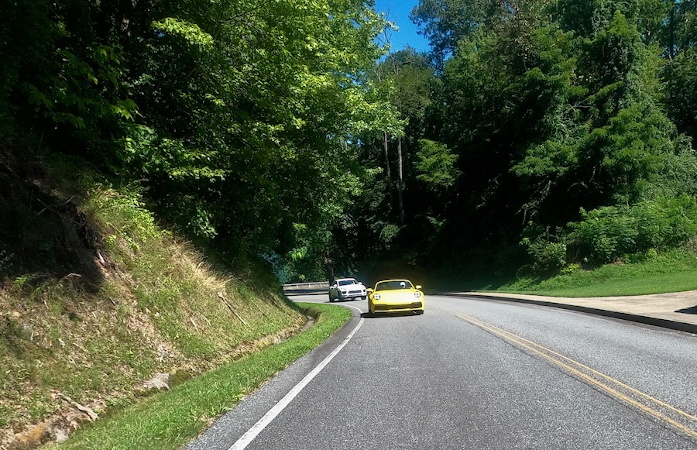 At the Tail Turnaround on Chilhowee Lake in Tennessee, these Tail “First-Timers” were awestruck on what they had just experienced. Dick and Linda in their white 911 cab switched drivers so Linda got the experience of “Slaying the Dragon.” This drive also ended at Tapoco Lodge with lunch by the river where we met up with another 8 members who drove up on their own to enjoy lunch, the scenery and great driving roads.

At the end of the two days we had 43 members in 22 Porsches participate in this two-day event of driving, eating and socializing.

Enjoy the photos and videos below from the event (by Jim Moore and Bob Disney).

Drive Group 1 Leaving Tapoco Lodge for Tail of the Dragon

Time Lapse Video of the Tail of the Dragon Drive

Finally, here is a video of the entire 11 miles (thanks to Dan Rives).

Next Events
August 19, 2020: Social Mixer Dinner at Mary’s Burrito. The first group is full, but we are now opening up a second group – details and registration.

August 29, 2020 SUV Drive to Wayah Bald – Bring your SUV; it doesn’t matter whether it is a Porsche or not and enjoy driving Wayah Bald before we go off-road on the Forest Service Road to the top of Wayah Bald for some fantastic views and a picnic lunch (you bring it).
Registration opens up on Friday, August 14 at noon here

Place the cursor on or below the image to pause the slide show.