The September Drive and Dine saw a record number of participants as we drove the Cheese Trail from Hendersonville to Fairview to Black Mountain.

This 50-mile drive had 24 Porsches with 44 drivers and co-drivers. Another six people joined us for lunch for an even 50 people participating. 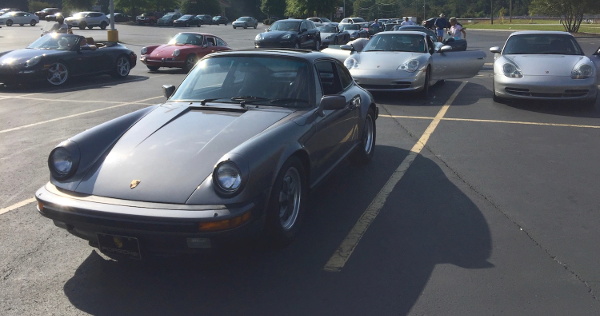 We had a broad range of Porsches.  Jim Moore led one group with his ’86 Carrera instead of his ’09 Turbo in an effort to keep his foot out of the gas.  For the most part he was successful except for the final downhill run into Black Mountain where momentum couldn’t be helped. 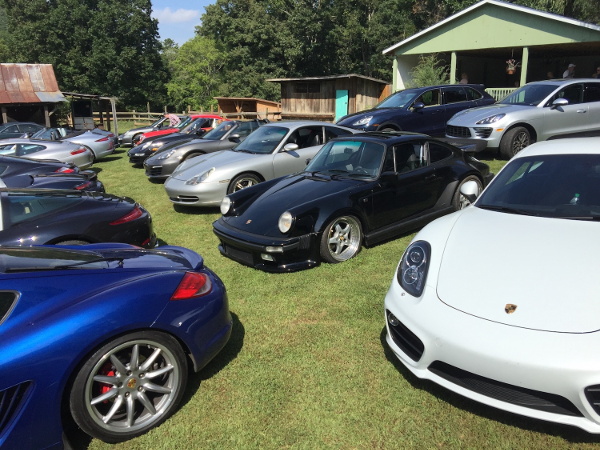 Following Jim and the other lead car of David and Suzi Linton in their Agate Gray Boxster were a 930 RUF Turbo, a 944, a 912, a couple of Macans, Cayennes, Boxsters, Caymans and Carrera 911’s including a couple of GTS models.

We left Hendersonville at 10:00 am sharp in two drive groups passing through the Apple Orchards, past a longhorn Steer Ranch to Bearwallow Mountain Road.  This is a newly paved road that climbs Bearwallow Mountain and drives along the ridgeline.  It is a beautiful road for driving but unfortunately the rains had washed a lot of gravel on the road.  Everyone still seemed to enjoy the twists and turns while exercising their Porsche.

The title Cheese Trail was because we drove a route where Western North Carolina creameries are located. Unfortunately they are small operations and couldn’t handle 24 cars with 44 people.  Fortunately the road connecting the creameries provided us with a fun, spirited drive to enjoy our cars.

We used an alternate stop at Troyer’s Country Amish Blatz in Fairview where we had a nice display of our Porsches on the green field while we shared Amish cheese and cold cuts with a bottle of cold water.  Some drivers and co-drivers enjoyed shopping in the market for fresh baked goods, jams and pickles from the Amish farms. 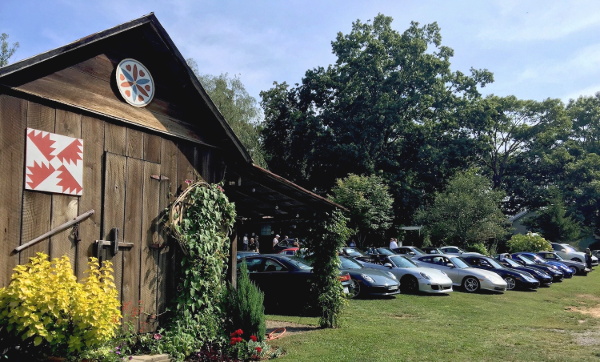 What is a drive without a little drama, especially when you have 24 cars.  A left turn onto Charlotte Highway caused the line to be split and separated and a few cars missed the turn off the highway to Troyer’s.  After a few phone calls and a corralling by the Sweep vehicle, the missing cars were found and re-routed to Troyer’s.  Thanks to Larry and Jean Wolford and Charlie Giudici for your sweep driving efforts.

The final leg of the drive took us down Old Fort Road where we connected with NC-9, an official NC DOT Scenic Byway they’ve titled the Black Mountain Rag.  It is a great series of twists and turns that takes you up and over the Continental Divide and then down into Black Mountain.

Lunch was at the Black Mountain Bistro where we all re-counted our driving prowess on the twists and turns – who drove fast and who drove slow, but it was fun for everyone no matter your driving skill.

The next event is a Breakfast Ramble on September 22 in Little Switzerland.

See you at the Chalet Restaurant at the Switzerland Inn!