On March 9, 2018 the PCA-sponsored Werks Reunion for the east coast was held at the Omni Resort on Amelia Island, Florida.

Over 500 Porsches and their owners were in attendance including at least six members from the Appalachian Region:  Jim Moore, Charlie Hickey, Carl and Janice Von Schummer, Dennis Pevarski and Doug McKee shown here in his period helmet with television personality and Peterson Museum Board Director, Bruce Meyer. 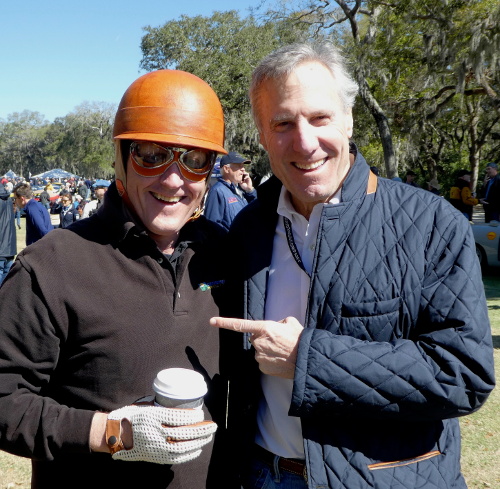 Doug McKee's unique and exclusive 2018 Porsche 911 S Cabriolet was on the judging show field while other members' Porsches were in the Corral that had every Porsche represented that was ever built.

The event started with a region dinner the night before the event where we discussed what we hoped to see the next day while enjoying some good food at the Salty Pelican.  A big discussion ensued around some of the high prices being forecasted for the unique Porsches going on the block at the multitude of auctions.

Charlie was the first on the show field the next day at just after 7:00 a.m.  The rest of us trickled in and met up at the 356 Outlaw display for a meet and greet around 10:00.  We spent time walking the show field together enjoying the vehicles and discussing wish lists for our next purchase or at least our next dream.

It was a fun event.  Don't plan on missing it next year.