The Tennessee Region PCA is proud to announce the 11th Winterfest, February 17-18.

This is the twelfth in a series by Howard LaPlante on his early experiences with cars.

We held our December Mixer at the Thirsty Monk South.

Registration opened 12/15 to show your Porsche at the Amelia Island Werks Reunion.

Appalachian Region member Doug McKee sent us descriptions of some interesting car shows he attended this year in case you are thinking of attending one in 2017.

This is the eleventh in a series by Howard LaPlante on his early experiences with cars.

The Appalachian Region held its annual Holiday/Christmas Party, hosted jointly by the Region and Porsche Asheville on December 8 to benefit the Salvation Army Boys and Girls Club of Buncombe County.

This is the tenth in a series by Howard LaPlante on his early experiences with cars.

Before we all get caught up in Thanksgiving, please consider RSVP'ing for the Appalachian Region Holiday/Christmas Party to be held on Thursday, December 8th from 6 to 8 pm at Porsche Asheville, 621 Brevard Road, Asheville.

In November, we held our monthy Social Mixer at the Thirsty Monk North in Woodfin.

Here’s your invitation to the Appalachian Region – PCA Holiday/Christmas Gathering to benefit the Boys and Girls Club of Buncombe County.

Several events are coming up.

This is the ninth in a series by Howard LaPlante on his early experiences with cars.

The 'Saluting Our Veterans' car show will be held at the Charles George VA Medical Center Saturday from 10 a.m. to 2 p.m. it is our November club event. If you haven't registered, you may do so at the show. Even if you don't plan to show your car and you have some time tomorrow, please show up to support our veterans and their recreational therapy programs.

This is the eighth in a series by Howard LaPlante on his early experiences with cars.

As a quick update, we have several events coming up.

This took place on October 22 in Greenville, SC.

This week, we have two events on Wednesday, October 12th:

This is the seventh in a series by Howard LaPlante on his early experiences with cars.

After trying to drive the planned Leaf Tour Drive and Dine, the route has changed.

The first Willkommen (Welcome) to the new Porsche Cars North America (PCNA) Headquarters was sponsored by PCNA and the Peachstate Region on September 21.

This is the sixth in a series by Howard LaPlante on his early experiences with cars.

We have a pretty busy next couple of weeks: as reminder all Appalachian Region activities (and other car-related events) can be found on our website Events page.

Coming up this week, we have a social mixer at Highlands Brewing (12 Old Charlotte Hwy, Asheville) on Wednesday from 5 to 7pm.  We will meet on the rooftop unless the weather dictates otherwise; food truck(s) will be on site for food.

This is the fifth in a series by Howard LaPlante on his early experiences with cars.

This was the fourth year for this event and it was a big success with 62 members attending.

Directions to the Region New Member Social and Picnic

This takes place at the Ramble on Saturday, September 3, beginning at 5 p.m.

The first Appalachian Adventure is in the books: we had over 100 participants with over 50 Porsches in attendance. It was a great success (with a few ‘gitches’) and we raised $1300 for Manna FoodBank:

This is the fourth in a series by Howard LaPlante on his early experiences with cars.

Summer and fall will be busy in the Appalachian Region. Peter highlights the events.

This is the third in a series by Howard LaPlante on his early experiences with cars.

Put this on your calendar today: our Annual Picnic and New Member Social will be held at Long Meadow Park/The Ramble in Asheville on Saturday, September 3 at 5:00 p.m.

This is the second in a series by Howard LaPlante on his early experiences with cars.

Picnic @ Long Meadow Park in The Ramble in Asheville on Saturday, September 3 at 5:00 p.m.

This is the fourth year for this event with the first three years being a huge success. It’s a pot luck event with everyone contributing an appetizer, side dish or dessert. The region will provide the main dish, Broasted Chicken from Little Pigs BBQ in Asheville. Cost is $10 per person to cover table, chair and pavilion rental.

About 20 members attended the first Appalachian Region social mixer on July 13, 2016 at the Sierra Nevada Taproom in Mills River.

We intend to hold these on the second Wednesday of most months, although we will skip August to avoid conflicting with our Appalachian Adventure. These provide opportunities for members to get together in an informal environment, share car stories and enjoy each others' company. The locations will vary so some should be close to you. 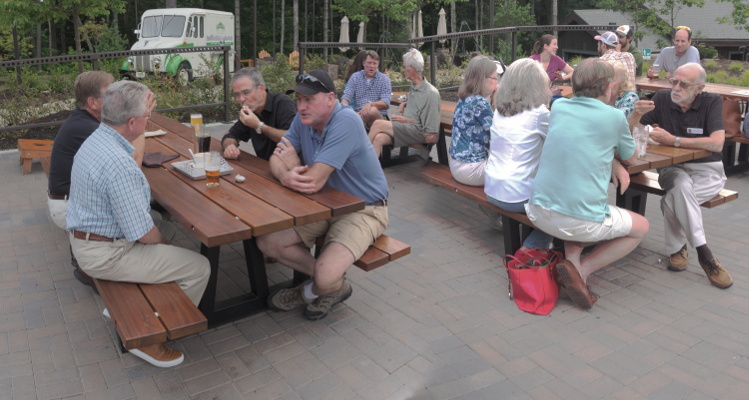 Despite the overcast sky and occasional rumble of thunder, we met on the terrace and remained dry, although some drove through spatters of rain while driving both to and from the event. The taproom is large and crowded inside, but with a little determination we managed to find each other. We'll probably hold September's mixer at the Wedge Brewery, which will be more convenient for those on the North side of Asheville.

We hold these events monthly. You can see where they've occurred here.

This is the first in a series by Howard LaPlante on his early experiences with cars.

Yesterday, our Treasurer, Matt Pohsweg, received an email request apparently from me (president@aprpca.org) to wire over $8,0000 to a California bank. Fortunately he was properly suspicious and quickly found the e-mail to be bogus.

Drive and Dine to the Highlands Motoring Festival

This proved to be a very popular trip with 24 members signing up; for the first time, we had to close registration for a drive and dine.

Our club has various social events throughout the year. This provides an excellent opportunity for members to get together in an informal environment, share car stories and enjoy each others company. Our Social Mixer will be held the second Wednesday of each month with the locations varying throughout the year. On July 13th we'll meet at the Sierra Nevada Brewery. Start time 5:30 p.m.; please join us and get to know your fellow club members.

As a reminder, June is a little different: our Board meeting is still this Thursday (Porsche Asheville conference room, 4pm) but our Drive& Dine is not this Saturday as would be normal: it is scheduled for Saturday, June 11th, to correspond with the Highlands Motoring Festival.

On another sunny day in the western North Carolina mountains, a group of Appalachian members took a senic tour to the very popular Red Bridges BBQ in Shelby.

On Saturday June 11th we have a planned a great day of driving and dining with a final stop Higlands NC for the Highlands Motoring Festival. We will be meeting at a coffee shop in Brevard, NC and then taking some curvy roads to a luncg spot in Saphire. The start will be at the Brighter Day Coffee located at 102 College Station Dr, Brevard, NC 28712 with Lunch at the  in Saphire Mountain Brewing Company. Then of to Highlands, NC and the motoring Festival. Please arrive no later than 9:30am so that you have time to sign the release form and socialize.

Just a quick note: three upcoming events, a reminder and a notice;

This is PCA's newest National event, and it takes the place of PCA Escape. This first event will take place in Olympic Valley, California.

Now is the time to plan on joining your Porsche-loving friends and register for Appalachian Adventure, August 12-14 2016, Fontana Village Resort, Fontana Lake, North Carolina. Onsite accommodations are available at the resort at a group rate. The Resort will release their hold on our block of rooms on May 12th and will not guarantee room availability beyond that date.

Thanks to Michael Dietzel for finding this story of a different kind of kit car.

On Saturday May 7th we have a planned a great day of driving, museum visit and a final stop at a bracket winning Barbeque Eatery in Shelby NC.

On April 14 Porsche Asheville unveiled the 2017 Carrera at an invitation-only gala at the Asheville Art Museum.

in Robinsville, NC, on the Cheoah River, about 25 miles from the Fontana Village Resort.

You probably noticed that iIn early March we moved our Website to a new host. Since then, we've added several new features to make it more useful, interesting, and easy to use.

Appalachian Adventure is taking shape quickly; here are some updates.

Steve Goodman shared his pictures of this classic concours.

A Top-down Drive to Jaime's in Brevard

As the weather turns nicer here in Western North Carolina and the Appalachian Region gets into ‘full song’, it’s time to drive!

We had a great turnout at Stuttgart Motorwerks on a beautiful Saturday morning; I saw a lot of new faces and I apologize for not getting around to meet you.

The region returned to Pete Martin's shop to absorb some tech discussion.

In order to improve our Region, two quick 10-question surveys have been developed to gather feedback regarding experience and preference of our membership. All Region members, primary and associate, are encouraged to complete both surveys:

Wow! Almost a month has passed since my last communication! Our next event is a Tire Tech session at Jan Davis Tire Store in downtown Asheville at 209 Patton Avenue, 10 a.m. until noon on Saturday, February 6th, with coffee, donuts and possibly ‘giveaways’ provided courtesy of Jan Davis.

Our first meeting of 2016 featured Richard Booher and Britney Irwin of Fat Cat Customs, who discussed and demonstrated the installation of clear car bras.

I would like to wish everyone a safe, prosperous and happy 2016. I am looking forward to serving you for the next two years as your president and I am particularly excited about our upcoming Appalachian Adventure, 12-14 August 2016, and Treffen 2017- Asheville, 20-24 September 2017.